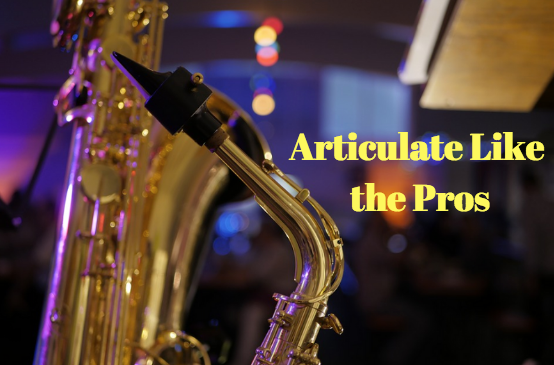 How many times were you told to pick up the speed on a passage with a whole bunch of fast tonguing?

Or are you stuck trying to perform a really fast Bebop lick but it just doesn't sound authentic because you are slurring everything?

One of my students was auditioning for the Marines Band, and one of the pieces had extremely fast articulation at 140 beats per minute.

When I first met him, I noticed he wasn't really articulating at all, especially the first note of a phrase. He was doing what most woodwind players do...using breath attacks and trying to pass them off as articulating.

And he was making a huge mistake with his approach to articulating that was slowing him down every single time.

If he continued with that bad habit, he had no hope of getting anywhere close to 140 bpm...

Let me share a story about how I was the featured artist on a fan favorite song with a whole lot of crazy articulations...

Fourteen years ago, I was booked to perform at an Elvis/50's Tribute Show at one of the most well-known venues on Long Island at the time, the Westbury Music Fair. This was an important show, as it was one of my teacher's last shows before he passed away.

At the time, it had been a dream of mine to be able to perform there, so I was really excited when this opportunity came up.

The cool thing was that I was going to be featured playing Yakety Sax, the classic sax solo made famous by Boots Randolph.

Now, if you don't know that tune, it has a whole lot of articulation styles and fast tonguing. And we were going to perform it even faster than the original recording.

I was good at articulation, but that tune was a beast! It took quite a while to get it clean and comfortable before that important show.

What saved me was all those years of playing trumpet...you see, articulation is crucial to producing a good tone on a brass instrument. So all that double and triple tonguing, and wild and crazy cornet solos really came in handy for playing Yakety Sax.

And while I was struggling to increase the speed every session, I noticed what worked and what didn't.

And my big discovery was that I developed a really simple, yet powerful system that got me the results I needed for that gig and many other tunes.

Once I had the system down, I shared it with my students...and it worked!

Students that were not articulating at all were getting it and their tone was clearing up.

Students that were resorting to strange habits when articulating were able to replace them with better ones from my system and increase the speed of their articulation.

And it really is a simple way to approach articulation too! (By the way, it helped that student with the Marine Band audition - he not only was able to play the piece at 140 bpm, but he was even able to perform it at 148 bpm!)

And now, I want to help more people all over the world clear up their tone and be able to play passages in any style of music they like at the written tempos.

Articulate Like the Pros; Master saxophone articulation to play any style you want

Here's what you get in Articulate Like the Pros:

Plus, a special Bonus Lesson on Swing vs. Straight 8th's - know when and how to use both styles when performing Jazz.

If for some reason you are not satisfied, there's a 21-day full refund.

Just contact me via email within those 21 days, and your money will be refunded.

All I ask is that you provide feedback as to why you are not satisfied.

This course is for you if:

This course is NOT for you if:

Click the Buy It Now Button and get closer to mastering your articulation today!